Can You Decline a Gift the Giver Can’t Afford? Gentlemanly Advice 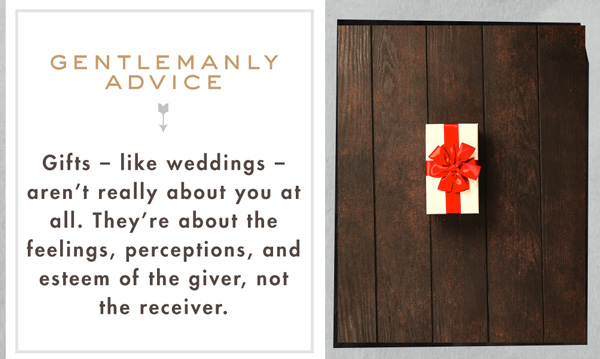 
Receiving a gift is great – except for when it’s super stressful. 7 experts break down the etiquette of refusing a gift that puts you in a tough position.

A reader recently wrote into our Gentlemanly Advice column:

Your post about the Bulova Moon Watch is why I’m seeking advice. I’m a watch guy and my in-laws got me a Lunar Pilot for my birthday (!!!). They’ve heard me talk about this watch for years and it’s the most generous thing I’ve ever gotten, which is also kind of the problem. My father in law just got laid off due to COVID and now their retirement situation is uncertain. Which leads me to the watch. That’s money they really need right now, and I don’t feel like I can keep it knowing what I know. On the other hand, I fear refusing it would be insulting or shameful. My wife says keep it. My gut says give it back. Maybe you can be the tie-breaker.

This one is tricky.

You can’t decline it because – you’re right – it would make your in-laws feel hurt (and probably ashamed).

It’s tough to keep it because – apparently – you’re an ethical and caring person.

You can’t simply refuse it and discreetly pay them back with meals and favors because they need to see you wear exactly this watch.

Worry not. We’ve shared your predicament with seven etiquette experts. Here’s what they have to say.

Can You Ever Decline A Gift?

The experts are unanimous: probably not.

But to really answer this question, we have to consider the very nature of gift-giving itself.

“There are many languages of love and one of them is gift-giving,” says Jodi Smith, founder and  president of Mannersmith Etiquette Consulting.

Gifts are a big way we communicate affection, support, love, and recognition to people we care about. In this sense, gift-giving is more about the feelings of the giver than the receiver. It feels good to give gifts.

Heck, for some people it’s the only way they can show affection.

Weddings follow the same rule if you think about it. Sure, they’re “your special day” but what are they really? Weddings are an ancient social tradition that gives the village a chance to recognize a union, network with one another, and get drunk.

Gifts also convey status and power. Gifts that don’t match the occasion or your socio-economic status are “stingy.” Give your workmate a jetski for the office Secret Santa and you’re “flashy” (or insane). Refuse a gift and it’s like you’re refuting the giver’s status.

In other words, gifts – like weddings – aren’t really about you at all. They’re about the feelings, perceptions, and esteem of the giver, not the receiver.

Simply put, it’s almost impossible to decline gifts without hurting the giver’s feelings. You risk wounding the relationship, causing shame, and appearing ungrateful. All of those outcomes are ungentlemanly.

When It’s OK To Decline A Gift

“There are only a handful of instances where it’s acceptable,” says Bonnie Tsai, founder of Beyond Etiquette: “If it’s the wrong size, a damaged item, or missing a part.”

Tsai continues, “If you received a sweater or a pair of shoes that doesn’t fit you well, it’s usually acceptable to ask to return or exchange a gift; unless it’s monogrammed. Most people would understand.”

There’s another scenario when it’s OK to directly decline a gift. Consider this scenario from etiquette consultant Jodi Smith:

Your father gives you your grandfather’s pocket watch for your birthday. It is way old-fashion and so not your thing. But you have two younger siblings, one who always coveted the watch.  After appropriately thanking your father and giving it some time, you would decline the watch to your father so that he can gift it to your sibling.

I love this. You’ve both recognized your father’s gesture to his oldest son and your younger brother’s feelings. It’s a twofer.

Etiquette expert Bonnie Tsai adds a note of caution, however: “It’s important to keep in mind that communication is crucial if you do want to decline a gift. Let them know you appreciate the time and effort they put in.”

What Are Your Options When You Can’t Decline A Gift?

“The question of whether declining a gift is kosher became a lot easier to answer with the invention of the gift receipt,” says Dave Bowden, founder of Irreverent Gent.

Gift receipts and exchanges are your friend, especially when the giver doesn’t need to see you using the item, like this scenario from etiquette consultant Jodi Smith:

Your college roommate – who you’ve barely spoken with and haven’t seen in 9 years – sends you a fancy cake stand from Crate & Barrel.  You do not bake, have gone gluten-free and rarely entertain in your apartment.  After sending along a sincere thank you, you bring it back to C&B and exchange it for a picnic set you know you will use.

Even if you exchange a gift, it’s absolutely necessary to thank the giver for the original item. “Thank you notes are required to maintain the relationship,” says Smith, “but once the note is written, the gift may be donated, exchanged or shared as you see fit.”

How To Deal With An Over-Gifter

You may get stuck with a crummy or problematic gift but there are things you can do to prevent this situation in the future.

The first technique: redirect the giver to experiences instead of stuff.

“Communicate with them,” says expert Bonnie Tsai. “Be sure to acknowledge much you appreciate all they have done for you, but you would prefer to share experiences together instead.”

Experiences can include meals, classes, outings, or even a vacation. Tell them you have everything you need and would rather make memories together.

If you’re really close with the over-gifter it’s also possible to be even more direct. Take this example from expert Dave Bowden:

I had an aunt who always gave me large or extra-large sweaters for Christmas, even though I was 5’8″ and weighed less than 150 pounds. She didn’t want to bother guessing my size, so she picked up a large and told me I’d “grow into it.”

After two or three years of getting sweaters that I could have used as bed spreads, I finally said, “Thanks so much, I love this style, but I’m worried that it won’t fit. Do you think they have this one in a small?” That was all it took.

From then on out she bought me small sweaters, most of which fit well. As I got older and put on more weight, one year I told her that I now needed a medium, and it’s been mediums ever since.

Our experts all agreed: you can’t decline the watch.

“This was a wonderful, kind and thoughtful gift. To refuse it would belittle their amazing gesture and embarrass them with regards to their financial situation,” says Jodi Smith.

Dave Bowden adds: “They might even be so offended that the damage done by giving it back could outweigh the generosity you and your wife are showing them, and seriously harm the relationship.”

I hope that’s helpful. Personally, I also think you should keep it. It’ll be an object – and a gesture – that resonates beyond the current economic times.

Keep it, and pass it on to your son-in-law if you have the chance.

And then, there’s keeping the peace at home. As Jodi Smith put it, “The short answer is: listen to your wife.”

Have You Ever Refused A Gift? How Did It Go? Chat with Us in the Comments!

Read our last Gentlemanly Advice: Help! My Girlfriend and I Stopped Having Sex, or check out the full series.

Got a question for a future Gentlemanly Advice? Reach us with our contact form, hit us up on Twitter, or slide into our DMs on Instagram.

All Under $100: The 26 Best Winter Essentials From H&M Right Now

These are the Clothing Brands Worn by James Bond: Zara!?…