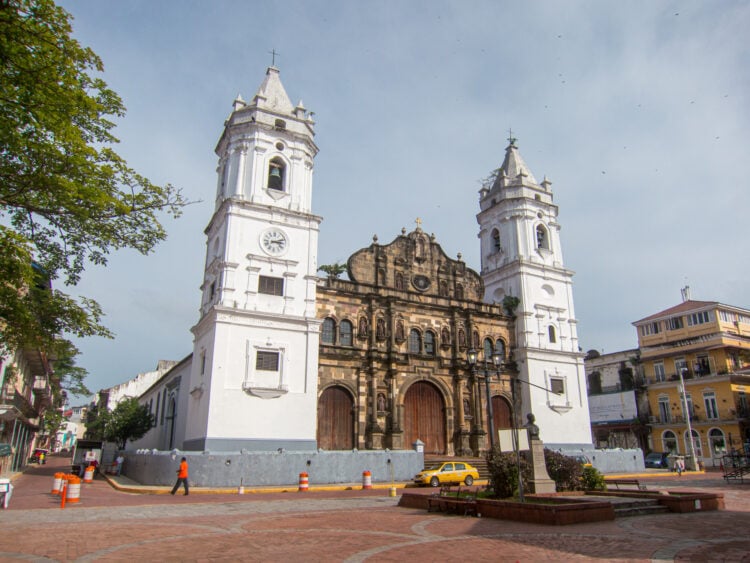 My first opportunity for backpacking Panama came tantalizingly close in 2005 when I traveled to Costa Rica and made my way south along the Caribbean coast.

In the town of Puerto Viejo, I encountered many backpackers traveling overland, having either come north from Panama or heading that way next.

I considered my options but stuck to my original plan to spend my full 18-day vacation exploring Costa Rica.

It would be another eight years before I returned to the region, this time dedicating two weeks to backpacking Panama.

What follows is my itinerary, which served me well as an introduction to the country.

Panama City is unique among capital cities in Central America as it’s located on the coast. Specifically, it faces Panama Bay on the Pacific side.

A modern skyline full of high-rise buildings occupies the Punta Paitilla district. I had little interest in spending time in that part of the city, though.

Instead, I based myself in the historic San Felipe neighborhood, better known as Casco Viejo (which means “Old Town” in Spanish).

This coastal area was settled in 1673 and recognized as a UNESCO World Heritage Site in 1997.

The walkable old town reminded me of Cartagena, though smaller and with fewer buildings having been renovated.

Some of the buildings, like the one pictured above, even lacked a roof. It was just a few walls that had been re-painted, the interior used for a craft market.

There were positive signs it was very much a work in progress, though, and I made a mental note to consider coming back in ten years to see how Casco Viejo has evolved.

I saw Panama City as a transportation hub. I entered and departed the country via the city, and also used it as a jumping-off point for trips to the coffee region to the west and San Blas Islands to the northeast.

Of course, I didn’t miss an opportunity to visit the Panama Canal while there.

The Panama Canal is, without a doubt, a miracle of human engineering.

However, it’s about as thrilling as the Hoover Dam, which is to say amazing in terms of sheer size, but hard to get all that excited about.

On my first full day in Panama, I took a taxi from Casco Viejo to the Miraflores Locks, which is the last lock before ships reach Panama Bay and the Pacific Ocean.

Three locks control the height of ships, allowing them to move from Gatun Lake (which empties into the Caribbean) to Panama Bay (and vice versa).

The canal features two lanes, and modern cargo ships a built specifically to make use of every inch of space they afford.

I spent a little less than one hour at the Miraflores Locks watching ships pass through and walking through the small indoor exhibition.

To reach Boquete, a small town in the heart of Panama’s western coffee region, I hopped an Air Panama prop plane for the 45-minute flight from Panama City to David.

From David, it was a one-hour drive north to Boquete, a small town on the eastern side of Volcan Baru, the highest point in Panama (3,475 meters).

There’s not much to see in Boquete, just the usual hodgepodge of hotels, hostels, restaurants, and tour agencies.

I stayed at Hostal Refugio del Rio, which was nice because there was some outdoor garden seating by the small Caldera River, which runs through town. It’s more akin to a stream or brook.

I can’t seem to find the exact spot now, but it may be Hostal Garden by Refugio del Rio.

Boquete offers plenty of things to do, whether you want to spend a day or a week.

Adventure sports and activities include:

I was most interested in taking a coffee tour, an activity that underwhelmed me in Costa Rica, but I thoroughly enjoyed in Boquete.

He had no prior coffee-growing experience and learned on the job.

Getting to Bocas del Toro

It’s easy to book onward travel from Boquete to Bocas del Toro. Check if your accommodation can book it or stop in any tour agency.

The overland trip takes about five hours via private minivan and boat.

Midway through my Panama adventure, I arrived in Bocas del Toro, a popular spot for backpackers traveling through Central America.

I gave myself three days and two nights in Bocas Town, which is the capital of the province and home to the airport.

If you’re interested in partying and meeting other backpackers, stay here.

There are plenty of agencies to book tours and scuba diving, plus restaurants and bars looking out over the water. If I was in my twenties, the vibe would’ve appealed to me.

But, I was in my thirties and more interested in spending time on quiet beaches and enjoying nature. This is not the atmosphere you’ll get in Bocas Town.

It was overcast and rainy on my first full day in Bocas del Toro, but I didn’t have time to waste, so I took a boat tour.

We visited a beautiful undeveloped beach, but the weather detracted from the experience.

The next day, the sun was out, and I booked a boat to Red Frog Beach on Bastimentos Island.

Walking onto this beach was when it hit me that spending my nights in Bocas Town had been a mistake.

A little advanced planning would’ve made all the difference in how I experienced Bocas del Toro.

Bottom line: there are beautiful spots to base yourself in Bocas del Toro. Plan ahead.

Getting to Panama City

Domestic air travel in Panama is inexpensive, so I hopped another Air Panama prop plane for the 45-minute flight from Bocas del Toro to Panama City.

Traveling overland takes about 30 minutes by boat and another 10 to 11 hours by bus.

Living in Medellin, I’d met many travelers who’d done the three to five-day sailing trip between Panama and Colombia.

The highlight was always their time in the San Blas Islands in Panama.

The one to two days of sailing in the open sea was a wildcard, depending on the weather, captain, and boat they used. Some had smooth sailing. Others got seasick.

I’d already been to Cartagena several times, so I wasn’t interested in sailing there from Panama.

I was, however, thrilled to find out that it’s possible to make trips to the San Blas Islands from Panama City.

So that’s just what I did, booking a 3-day, 2-night trip to Kuanidup island.

Kuanidup is a true tropical paradise. The island is only 100-meters long and not much more than 50 to 75-meters wide. It’s about the same size as an American football field.

Guests sleep in thatched-roof bungalows with sand floors. There are about a dozen on the island, and it wasn’t even full the nights I was there.

They have sit-down toilets, but no electricity. At night, they run a generator for a few hours to coincide with dinner and drinks. Meals are locally-sourced, including fish and seafood.

Days are spent hanging out on the beautiful beach, going for swims, and the occasional excursion by boat to visit other islands.

When backpacking Panama, I recommend leaving the San Blas Islands for last or at least not visiting them before Bocas del Toro.

While day trips from Panama City are available and less costly, I recommend spending at least two nights on your chosen island so you can fully relax.

Overall, I found backpacking Panama to be easy and worthwhile. Two weeks was just the right amount of time to get a taste of country, culture, and islands.

What I Learned – Stocks Rally On Hope For Coronavirus Vaccine

What I Learned – Draft or Pass: Le’Veon Bell…

7 FOODIE SKILLS You Can Learn at Home: Bartending, Coffee…