Take A Bite Out of NYC’s Best Food Halls 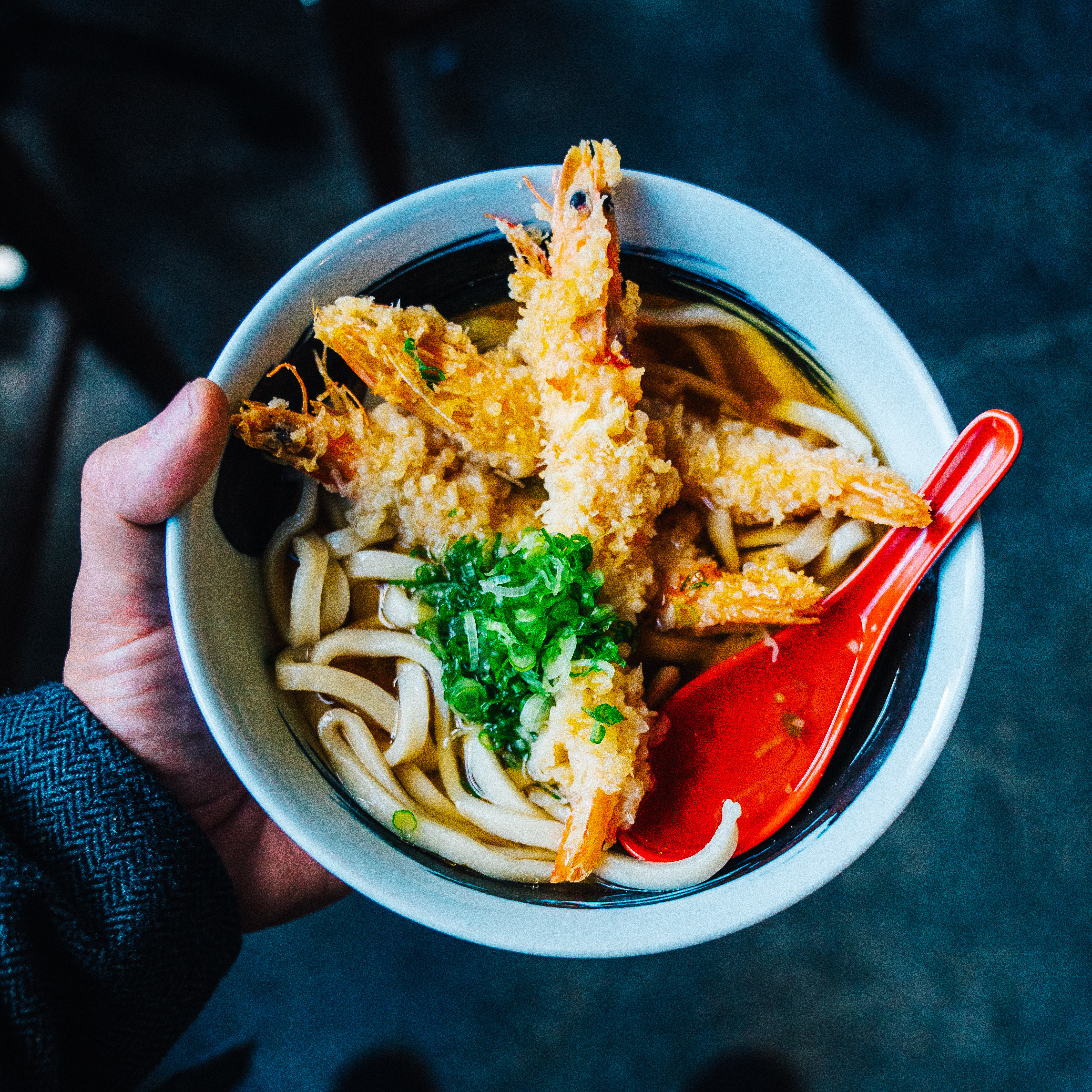 Hungry but not sure what to eat? Head to one of these NYC food halls, where options are plenty.

New York City’s dining scene has been embracing the concept of the food hall as a recipe for success. These epicurean centers house a mix of eateries as tenants or involve a single culinary theme. Right now, Manhattan, Brooklyn and Queens are leading the menu, with food halls to suit many different tastes. Here are some of New York City’s best food halls to see and eat at.

Escape the crowds and the corresponding waits at one of the restaurants in this Times Square food mall off the corner of Eighth Avenue and 44th Street. With only seven vendors it might sound small, but this 4000 sq ft venue has enough options for a quick pre- or post-Broadway show meal or a bite before catching your ride home.

Comprised of repurposed warehouses and factory buildings, this 6 million sq ft, mixed-use complex in Sunset Park, Brooklyn, holds a ton of businesses specializing in fashion, food, fitness, film and architecture. It’s also the headquarters for the Brooklyn Nets basketball team and a retail section known as the Design District.

It might sound gross to go to a food hall inside a subway station, but Turnstyle Underground Market, within Manhattan’s Columbus Circle-59th Street Subway Station, is filled with eateries that will foster your appetite.

Commuters can grab breakfast, lunch and dinner from 19 food vendors. Hey Hey Canteen serves up Asian fusion fare, while Daa! Dumpling prepares the Russian version of this doughy dish, and Arepa Factory prepares this Latin American corn cake. Access the market through seven street-level entrances; there are shops and pop-up stores too. 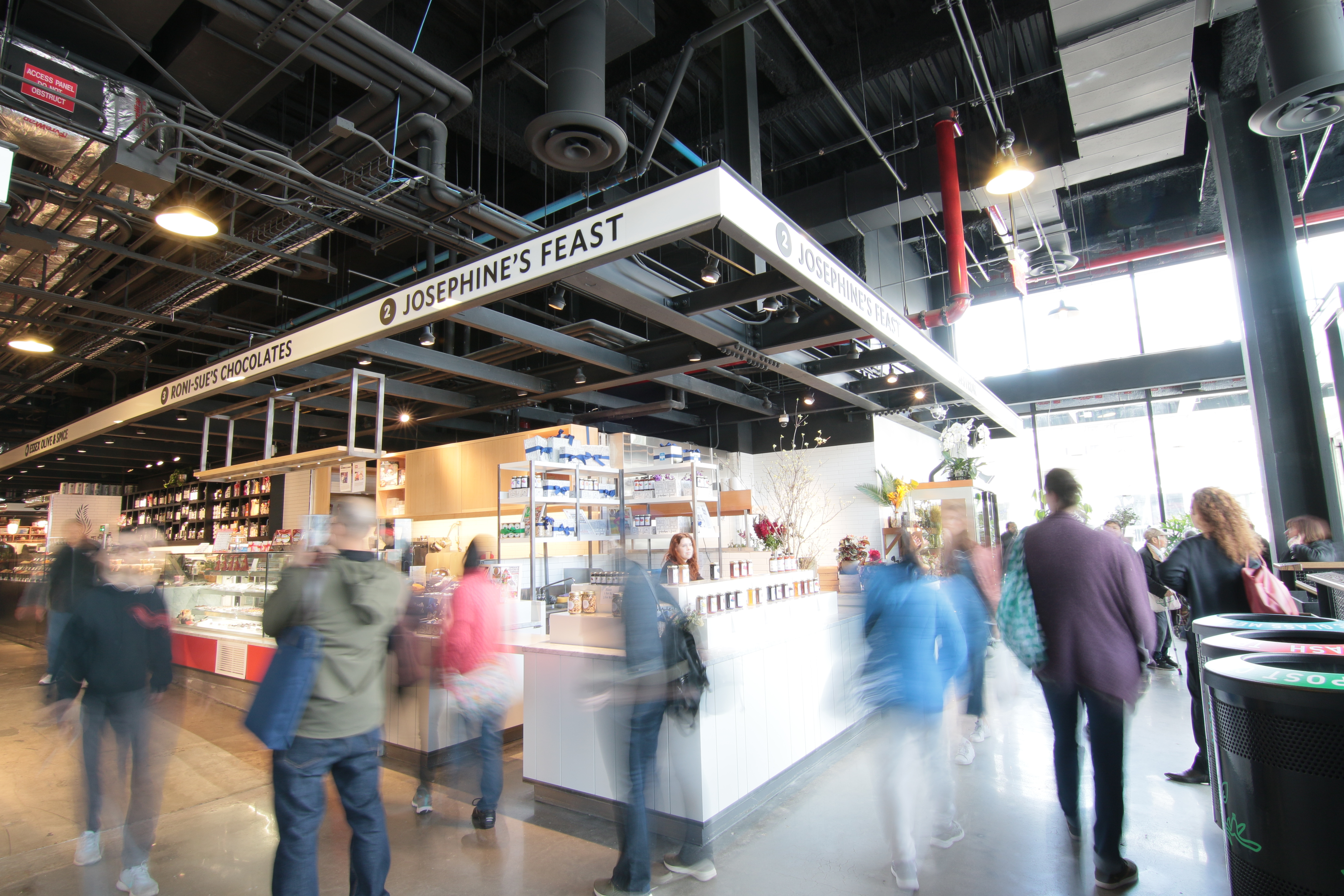 Inside Essex Market © Image courtesy of Lower East Side Partnership

With a history dating back to 1888, this Lower East Side institution started as an outdoor pushcart market where vendors hawked everything from hats to herring. As city streets got more hectic, Mayor Fiorello LaGuardia created an indoor sales space for them in 1940.

Over the decades, as the neighborhood changed and supermarkets rose in popularity, the Essex Market was showing some wear and tear. In May 2019 it re-opened following a 21st-century makeover and a move to a different spot on Essex Street.

Occupants include shops from the previous location (fruits and vegetables, meats and cheese providers) along with newcomers. Try Thai fried chicken at Eat Gai, breakfast from Shopsin’s and Middle Eastern food from Samesa.

Penn Station has been the subject of mixed feelings over time, but this addition makes it easier to squeeze in a food stop at this major rail-transit hub before a train or a show at neighboring Madison Square Garden.

Featuring five chef-driven concepts and a bar with indoor and outdoor dining spaces, diners can order veggie dishes from The Cinnamon Snail and The Little Beet, or go for carnivorous options from the butchery Pat LaFrieda. There’s also Neapolitan pizza from Ribalta, rolls and rice bowls from Sabi Sushi and the taqueria and juice bar Taco Dumbo.

This food hall in Chelsea has a tasty backstory. The building was once the factory for the National Biscuit Company – better known as Nabisco. It’s also where their Oreo Cookie was produced. Becoming an indoor artisan market in 1996, Chelsea Market is spread out, with artisan grocery shops, retail spaces and food stalls along with their Artists & Fleas craft-makers’ area. Good market eats include cheese-stick-makers Big Mozz; the Fat Witch bakery; Jamaican eatery, Tings; and Thai restaurant, Ayada. Nearby, step into Gansevoort Market, another food hall with Asian to American fare.

Similar to the all-Italian Eataly in the Flatiron District and World Trade Center, and the French-themed Le District in lower Manhattan’s Brookfield Place, this Spanish-inspired eatery from chefs Jose Andres and brothers Albert and Ferran Adria is inside Manhattan’s Hudson Yards development and has restaurants, bars and kiosks putting the spotlight on Spain’s regional foods.

Have a tapas crawl, feast on asador-cooked meats, or simply dine on empanadas and bacalao frito followed by helado for dessert.

Home to 40 food vendors, this Fort Green, Brooklyn, venue features well-recognized NYC restaurant names – it boasts the only Katz’s Deli outpost – alongside up-and-coming business in their own right.

On the concourse level of The Plaza New York Hotel, this opulent marketplace is full of fine food purveyors and counter-style dining options, where you can feel a little fancy while having breakfast, lunch and dinner or when taking your order to go.

Pick up some high-quality Kusmi Tea or purchase fresh-baked breads and delicate pastries from Boulud’s Épicerie or Pain D’Avignon Bakery. Or get tempted by the colorful macarons made by Ladurée or the richly-layered cakes from Lady M. Savory. Options extend to Pizza Rollio, whose approach to pizza-making is worth tasting, Tartinery, noted for its refined French fare, and Takumi Taco, a popular Mexican brand.

Travel Stories for Now and the Future

What I Learned – Malcolm Jenkins explains why he…

What I Learned – Undiagnosed COVID-19 could mean…