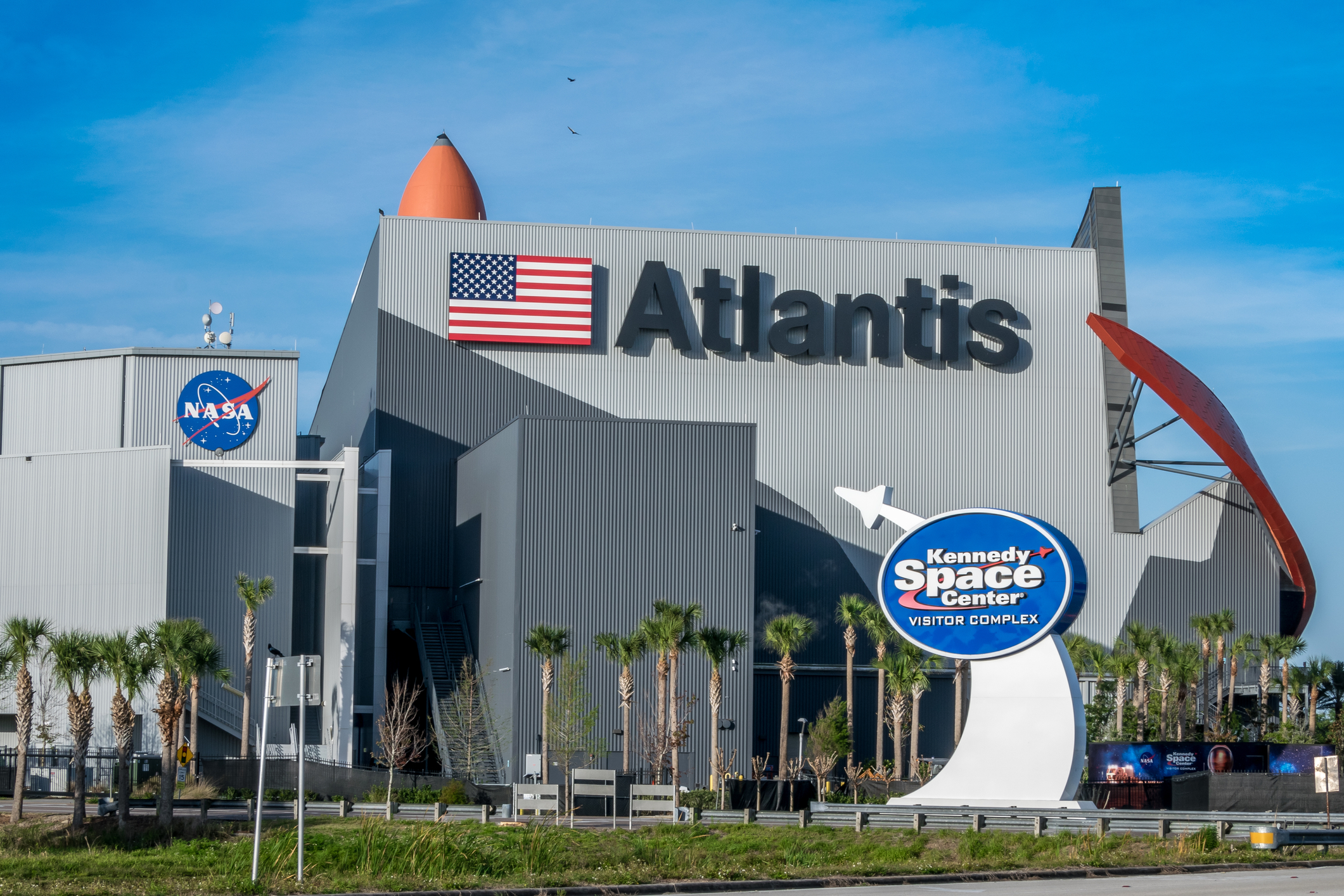 Just in time for the 50th anniversary of the Apollo 11 moon landing this summer, we’ve rounded up eight must-see sites that honor the history—and future!—of America’s space program.

This summer marks the 50th anniversary of the Apollo 11 moon landing, and what better way to pay tribute to the U.S. space program than by planning an epic adventure? From informative exhibits and spacecraft on display to activities that bring visitors closer to the stars, here are eight destinations across America that offer an out-of-this-world experience.

Spread out along Florida’s Space Coast, the Kennedy complex (kennedyspacecenter.com) is organized into mission zones, with attractions and tours arranged in chronological order. The Heroes and Legends exhibit honors pioneers in space exploration, while another tour gets up close and personal with the space shuttle Atlantis. Nearby, the American Space Museum and Walk of Fame in downtown Titusville is staffed by former space-center employees and has exhibit halls dedicated to the Gemini, Mercury, and Apollo missions. At Port Canaveral, wander the Exploration Tower’s seven-story museum, then head up to the observation deck for a bird’s-eye view of the Cape’s launch pads and the entire port. Cap off the day at the Cove’s restaurant row for an alfresco meal at casual spots like the Grills Seafood Deck & Tiki Bar or FishLips Waterfront Bar and Grill. 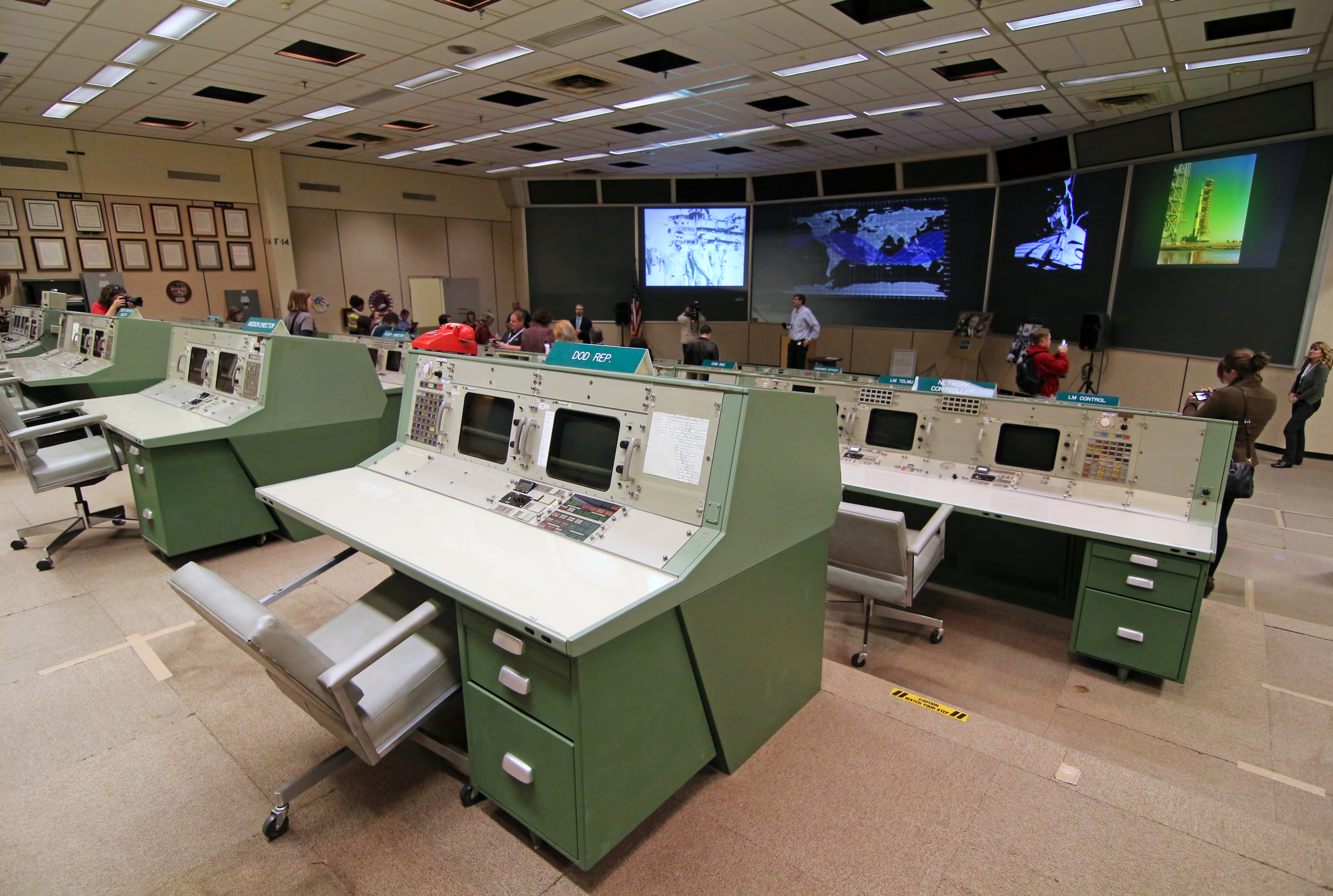 Playing an iconic role in NASA history since 1961—who could forget Apollo 13’s ominous message, “Houston, we have a problem”?—this Texas metropolis has more than earned its Space City moniker. The Space Center Houston (spacecenter.org) serves as both visitors’ center for the NASA Johnson Space Center and home to a massive collection of moon rocks and multi-flown aircraft in various galleries. Take a NASA tram tour of the JSC, then step inside a replica of the shuttle Independence, which is mounted on the NASA 905 shuttle aircraft. Visit the Starship Gallery to see the Skylab training module and the command module of Apollo 17, plus a fragment from its 1979 Earth reentry and JFK’s “We choose to go to the moon” speech podium. Across the main plaza at the Astronaut Gallery, scope out the space suits worn Wally Schirra and Kathryn Sullivan plus Sally Ride’s shuttle coveralls, then check out the Houston Museum of Natural Science for some stargazing at the George Observatory. Back on earth, Houston also has the Downtown Aquarium, the zoo, and the Museum of Fine Arts, and plenty of prime foodie options too. Try Truth BBQ’s 18-hour smoked brisket and the venison sausage spiked with black pepper and garlic at the Pit Room, or split a few things at Nancy’s Hustle, a modern bistro and bar with a plate-sharing theme.

On the western edge of Manhattan’s Hell’s Kitchen, docked at Pier 86, this aircraft carrier turned museum (intrepidmuseum.org) not only has an incredible aircraft collection representing all five branches of the U.S. Armed Forces, but it also holds the Enterprise, the prototype NASA orbiter that paved the way for the space shuttle program. At the Space Shuttle Pavilion, immersive exhibit zones with films, audio, artifacts, and photos tell the story of its legacy. Once you’ve had all the space you can handle, head four blocks south to Lucky Strike for some friendly competition over bowling and billiards. Add on six more blocks, and you’ll arrive at Hudson Yards, a high-end restaurant and retail enclave with an eye-catching, ticketed-entry spiral staircase called the Vessel. For even more meal choices, Gotham West Market has a small mix of artisanal food stalls, and Hell’s Kitchen’s Ninth Avenue is lined with dining options. 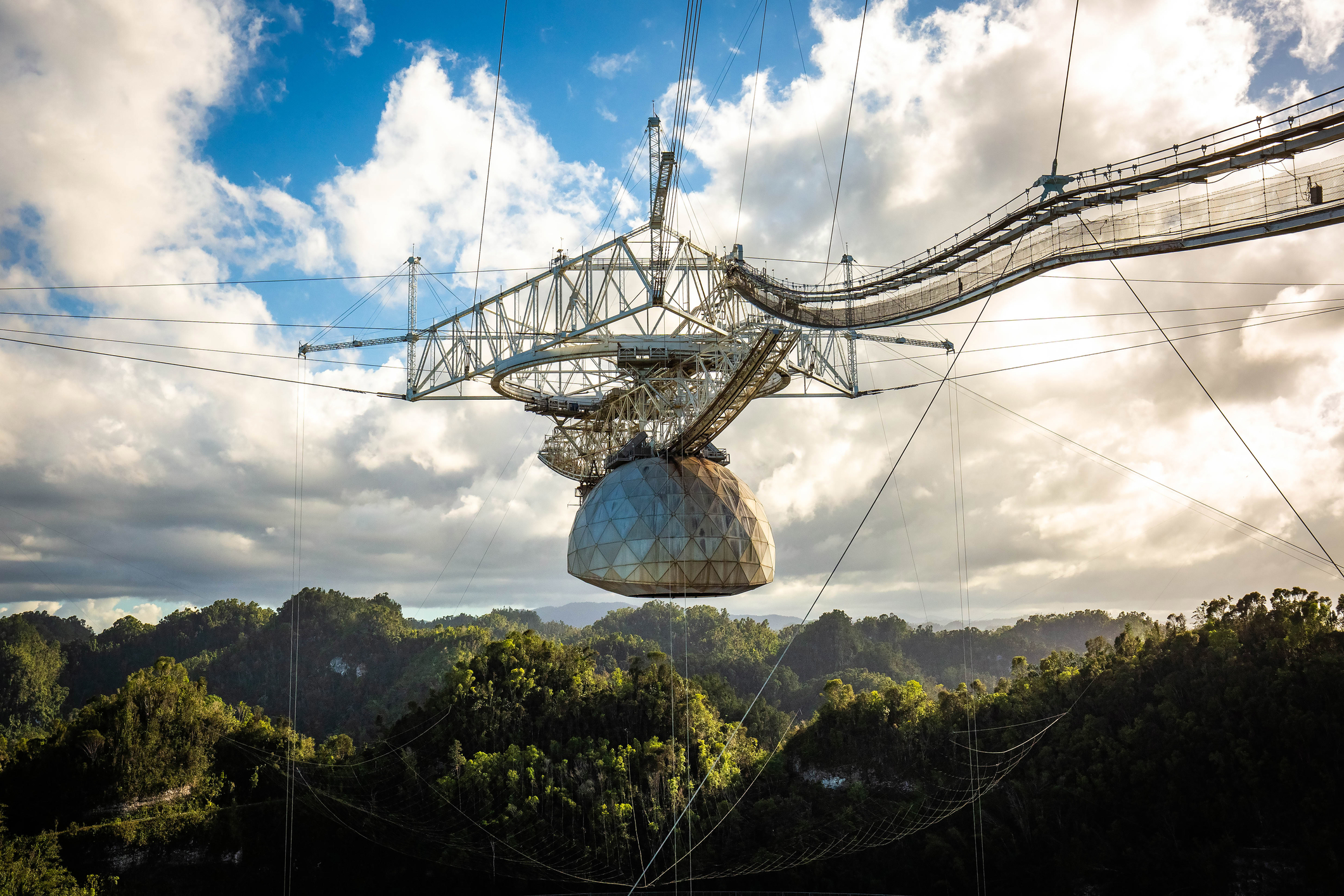 A facility of the National Science Foundation, Puerto Rico’s Arecibo Observatory (naic.edu/ao) is the world’s largest single-dish radio telescope, covering an area of about 20 acres. Self-tour the Science and Visitor Center or opt for the VIP version to see the 1,000 feet reflector up close from a vehicle; you can also take in the astronomy exhibits and check out the observation deck. Outside of the observatory, the Arecibo Lighthouse and Historical Park journeys through five eras of Puerto Rican history, and also has a mini-zoo, restaurant, and play area for the youngest aspiring astronauts. Other must-see spots include Cueva Ventana, which overlooks Rio Grande de Arecibo Valley and offers guided tours that touch on the cave’s ecosystem; Cueva del Indio, featuring impressive cliffs, petroglyphs, and a naturally formed rock bridge; and Arecibo’s La Poza del Obispo, a remote but popular beach spot.

Huntsville is true to its nickname, Rocket City, not least because the museum at the U.S. Space & Rocket Center (rocketcenter.com) displays one of only three authentic Saturn V moon rockets in the world. Catch an astronomy show at the INTUITIVE Planetarium, take on the challenge of a Mars climbing wall, and experience a motion-based flight simulation on the HyperShip. You can also tour the Redstone Arsenal—home of NASA’s Marshall Space Flight Center—by bus. And aim for the stars with hands-on astronaut training at Space Camp (spacecamp.com), the center’s anchor program. Back on earth, the Huntsville Botanical Garden houses an aquatic garden, herb garden, children’s garden, and an education center with amphibians and reptiles along with an open-air butterfly house. For dinner, opt for Cotton Row Restaurant, an upscale surf-and-turf establishment, or try Humphrey’s Bar & Grill for traditional bar food. Thirsty for more? The city’s brewing scene is pouring over with Salty Nut Brewery, Straight to Ale, and Yellowhammer Brewery.

6. National Air and Space Museum of the Smithsonian Institution: Washington 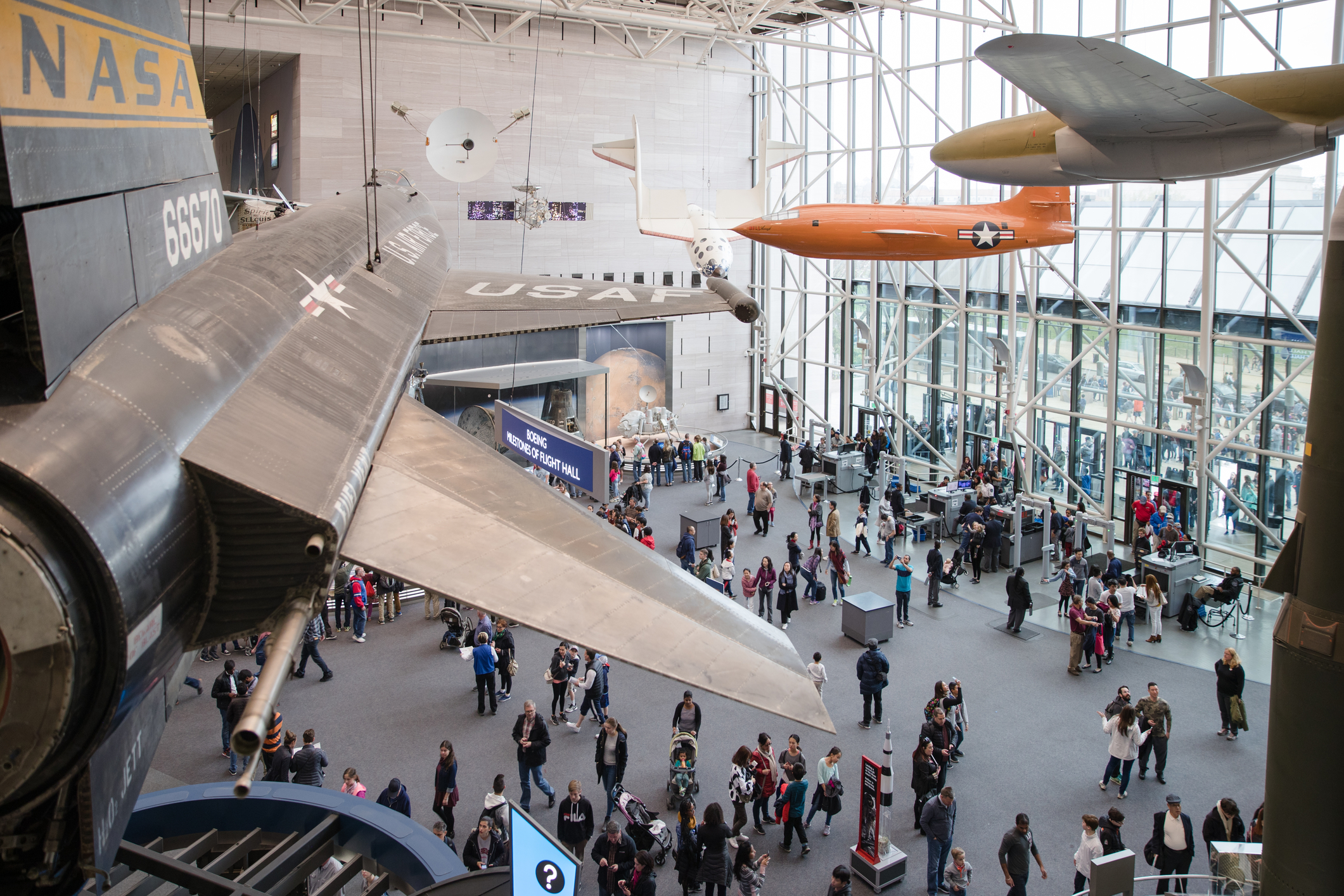 Centrally located on the National Mall, D.C.’s Air and Space Museum (airandspace.si.edu) takes flight with 22 exhibition galleries covering aviation, spaceflight, astronomy, and planetary science. In 2022, the museum will add to its roster with Destination Moon, which chronicles the race to the lunar landing. Craving more time with the cosmos? Take in a planetarium show or catch a movie on the museum’s five-story IMAX screen. Outside, the Phoebe Waterman Haas Public Observatory offers a closer look at the sun, planets, and double stars. A short walk or a free Southwest shuttle-bus ride will get you to the Wharf, a new and evolving entertainment destination on the Potomac River, and you’ll also want to stop by the Washington National Cathedral to view the Space Window, a stained-glass symbol of our connection to the stars. Pro tip: To see the Discovery space shuttle, head across the river to the the Steven F. Udvar-Hazy Center, the museum’s companion facility, located 30 minutes away in Chantilly, Virginia.

Home to the NASA Glenn Visitor Center, one of 11 in the United States, the Great Lakes Science Center (greatscience.com) goes in depth on how astronauts eat, sleep, and learn via its Living in Space exhibit. Peek inside the real-life 1973 Skylab 3 Apollo Command Module and go on a multi-media trip through significant moments in space history, take your photo in a spacesuit and see a moon rock along with artifacts from John Glenn’s February 20, 1962, Friendship 7 mission. (Later, you can experience another kind of rock at the Rock & Roll Hall of Fame). The accomplishments of female scientists and astronauts take the spotlight at the International Women’s Air & Space Museum at Burke Lakefront Airport, an essential stop. For refreshments, the Terrestrial Brewing Company has stellar suds and food trucks.

8. Museum of Science and Industry: Chicago 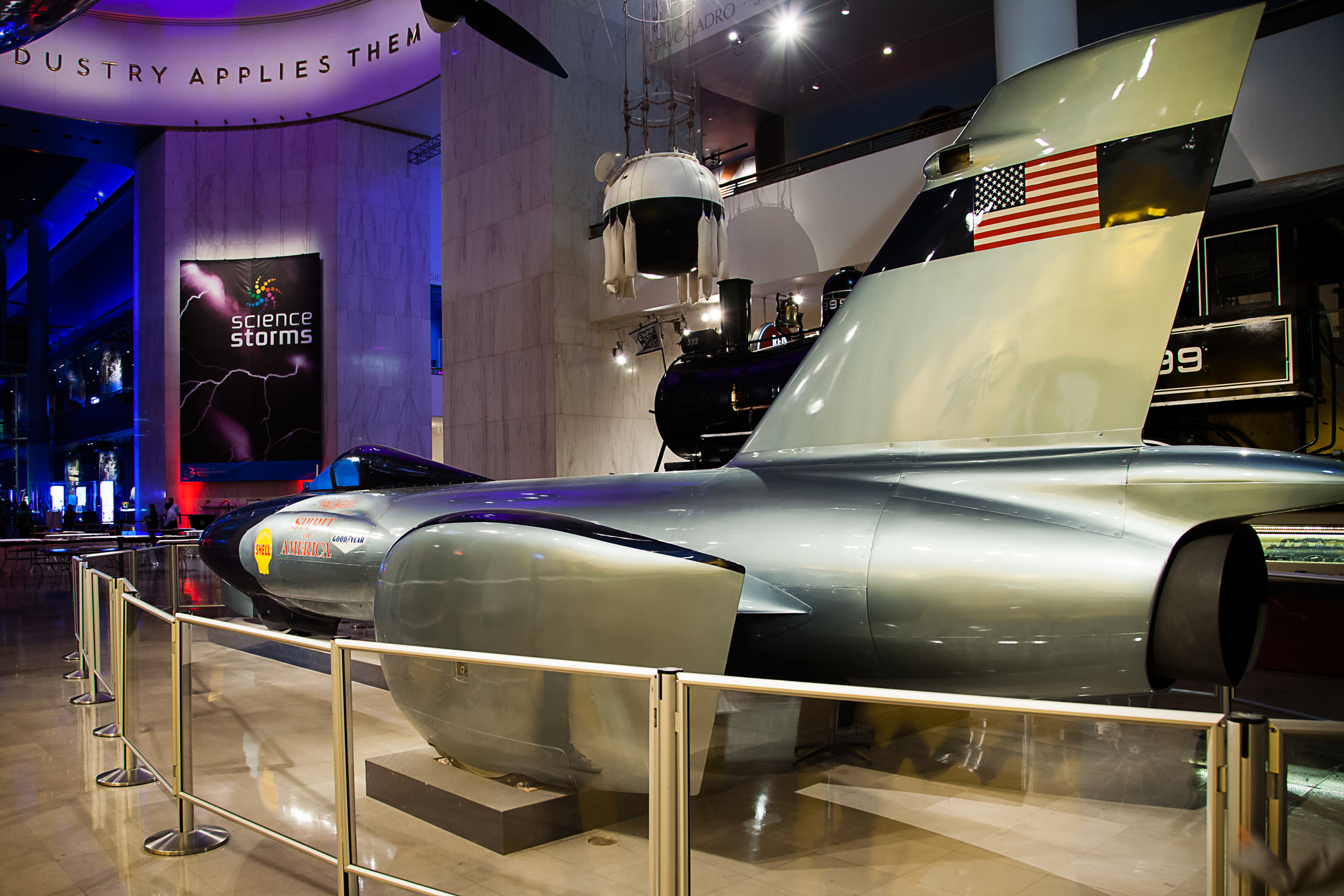 From Sputnik to SpaceX, the Windy City’s Museum of Science and Industry (msichicago.org) goes into orbit with visual and virtual presentations on space. Its Henry Crown Space Center’s Space Is the Place exhibit honors stories of exploration through artifacts and interactives: Hear tales recounting the missions that brought us to the moon, see the actual Apollo 8 module and the Aurora 7 capsule, and try a docking simulation in the walk-in mockup of the International Space Station. For an additional ticket fee, you can step into the role of an astronaut working outside the International Space Station via a VR Spacewalk ride. Near the museum, Hyde Park has lunch spots such as Jolly Pumpkin, a pizzeria and brewery; Medici on 57th,, with yummy Angus burgers, milkshakes, and baked croissants and pastries; and Piccolo Mondo, a white-tablecloth Italian eatery. Further north, near the Field Museum and Shedd Aquarium, the Adler Planetarium is all about astronomy.

What I Learned – China defies Trump with new round of tariffs on U.S. goods

What I Learned – Thailand plans to provide…

What I Learned – Primaried Steve King Glad He At…