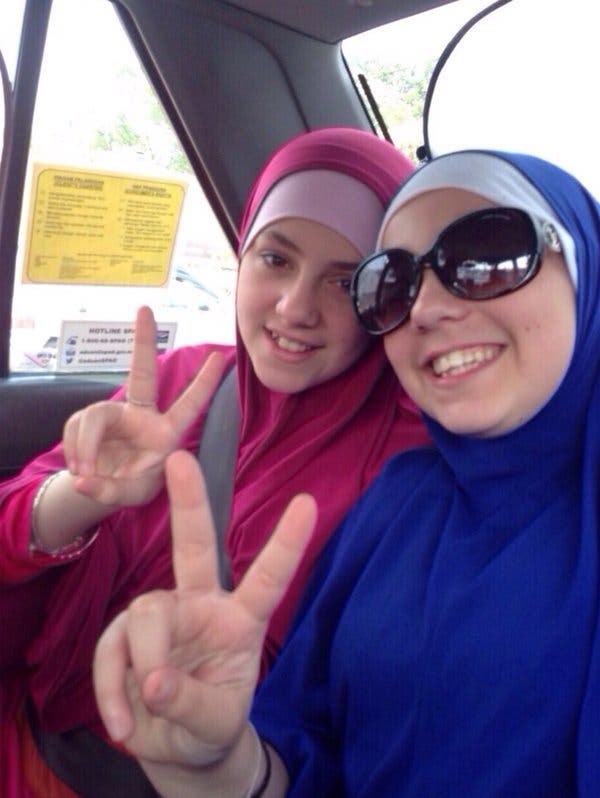 MELBOURNE, Australia — Karen Nettleton has spent the past five years in search of her grandchildren, who were taken by their parents in 2014 from Sydney, Australia, to join the Islamic State in Syria. Finally, in late March, she made it to the sprawling al-Hawl refugee camp in Syria’s Kurdish northeast.

There, she found a teenager she believed to be her granddaughter. As she lifted a niqab to reveal the face of the girl she was holding in her arms, Ms. Nettleton wailed.

She clung to her granddaughter, Hoda Sharrouf, 16, who sobbed and told her she was certain she was dreaming. Ms. Nettleton promised her she was not. “You’re not going to wake up,” she said in footage broadcast on Monday by the Australian show “Four Corners,” whose crew had accompanied Ms. Nettleton to the camp.

More than 200 Australian citizens have left the country to join the Islamic State, 70 of them minors, according to a 2018 report from the International Center for the Study of Radicalization at King’s College London. While many were killed during the war, dozens are thought to remain in Syria’s refugee camps.

Pressure is growing on the Australian government to act, and members of the public are campaigning for the Sharrouf children in particular.

In the lead-up to Australian elections on May 18, the question of what to do about the Sharrouf children has become something of a political football, with Prime Minister Scott Morrison softening to the idea of bringing them home but refusing to send Australians into Syria to do it.

“People need to know that my children are just normal kids,” Ms. Nettleton said on Saturday by phone from a safehouse in Ankara, the Turkish capital.

Since 2016, she has made three trips to the Middle East, each time with the goal of bringing her three grandchildren and two great-grandchildren, ages 2 to 17, home. Her grandchildren, Zaynab, Hoda and Humzeh Sharrouf, are the orphans of Tara Sharrouf, Ms. Nettleton’s daughter, who died in a Syrian hospital in 2015, and Khaled Sharrouf, an Islamic State fighter who was stripped of his Australian citizenship and is believed to have been killed.

On her most recent trip, Ms. Nettleton was finally reunited with her grandchildren and great-grandchildren in al-Hawl, but she has since become ensnared in a bureaucratic tangle between the Kurdish authorities and Australian government officials, who, despite saying they intend to help, have not come up with a plan or a timeline for doing so.

Ms. Nettleton’s story has shined a light on the plight of children taken unwittingly by their parents to join the Islamic State, some of whom are now languishing in displacement camps.

The Sharroufs are among hundreds of other children, widows and fighters for the Islamic State, or ISIS, from countries including the United States, France and the Netherlands, which are now faced with the question of whether to repatriate their citizens and how to deradicalize them, if necessary, once they have done so.

On Saturday, officials in Kosovo announced they had flown home 110 of its citizens from Syria, including women, children and four men suspected of being jihadist fighters, with the assistance of the United States.

For almost three weeks, Ms. Nettleton has been waiting in Ankara for news from the Australian government. The children had not chosen to go to Syria, she said, adding that the family was open to reintegration or deradicalization programs if the government deemed them necessary.

In the meantime, the leader of Australia’s political opposition, Bill Shorten, has said the children should be allowed to return home rather than become “collateral damage.”

On Tuesday, Mr. Morrison told Australian news outlets that he was working “quietly behind the scenes” with the International Committee of the Red Cross, but that there were many hurdles to overcome and that national security was the government’s first priority.

Ms. Nettleton said that she thought that the Australian government was sincere in its efforts to help her family, but that she was distressed by the lack of answers from the embassy in Ankara, which she had visited this past week.

Her lawyer, Robert Van Aalst, said he thought the government was stalling to appease its right-wing supporters in advance of the election. At least six other families had approached him for help in recent weeks, Mr. Van Aalst said.

“Those kids are the innocent victims,” said Dr. Jamal Rifi, a Sydney physician who has worked to deradicalize Islamic youth in Australia and who has been campaigning for the children’s safe return.

Dr. Rifi said that having met with the authorities “at the highest level of government,” he believed that the Sharrouf children would eventually return to Australia. A small but vocal minority was fomenting distrust against the children, he added.

The television show and social media have offered glimpses of the lives the Sharrouf children led in the camp.

In 2015, the Sharroufs’ eldest child, Zaynab, was married at age 13 to Mohamed Elomar, an ISIS fighter and friend of her father’s, who has since died. Now 17, she has two children and is seven months pregnant with a third.

On the “Four Corners” program, she expressed her desperation to leave the camp before her due date. “I’ve heard a lot of stories of people giving birth inside their tent, and a lot of them haven’t worked out,” Ms. Sharrouf said on the program. “It’s a big fear for me.”

In 2014, Mr. Sharrouf posted a photo of his 7-year-old son on Twitter showing what he claimed to be the severed head of a Syrian government soldier, leading to condemnation from the Australian public. Mr. Sharrouf and two sons are thought to have died together in 2017.

Dr. Rifi said that while he was “dismayed” by the violence of Mr. Sharrouf — whom he said he had known as a child in the Sydney Muslim community — he believed that the surviving children deserved to return to normality. He said that the trauma they had experienced living with the Islamic State was “the best deradicalization that’s available.”

No children, he added, should “suffer the sin of their father.”

For now, Ms. Nettleton awaits sporadic phone calls and text messages from her grandchildren, who remain in the camp and, she said, are “not holding up well” emotionally.

“I won’t be coming home until I have those children,” Ms. Nettleton added. “I said that the last two trips but this one — there’s no way I’m leaving.”

Cubs’ Lester could be close to return after simulated game

What I Learned – 37 Things That’ll Make You Say, “Well, There Goes All My Money”

What I Learned – Some Looting, Some Peaceful Demonstrations

What I Learned – Jesse Marsch: American…

What I Learned – WNBPA issues statement on…

What I Learned – Queen Elizabeth back in the saddle as…

What I Learned – Is This Country Above Or Below The…

What I Learned – Workers living in Mexico helping…