The best inventions affordably solve annoying, everyday problems. We’re kicking ourselves that we didn’t come up with them.

Thanks to Million Dollar Collar for partnering with us on this post to give Primer readers exclusive code PM10 at checkout to get 5 placket stays for only $11. We’re proud to partner with them on this post!

While we have respect for guys like Einstein and Thomas Edison, it’s often the men and women who solve seemingly trivial problems who are forgotten by history. Where would we be today without Harvey Kennedy – the guy who invented the aglet, that little plastic tip on your shoelace. Without the aglet, laces would unravel and become nearly impossible to tie. When it comes to a problem like your shirt collar sagging, most people would say, that’s trivial…who cares? Well, we do.

The style problems guys face each day don’t need to go undefeated. We’ve rounded up a few simple products and methods for making sure that sartorial strife doesn’t get you down. 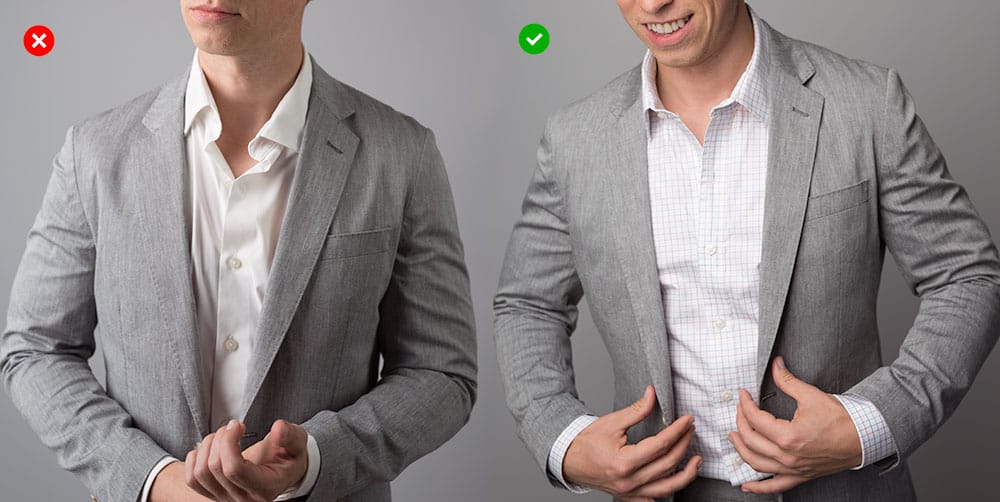 The dramatic effect of using a placket stay

For many of us, wearing ties are for the rarer, more formal occasions like job interviews and weddings. For the rest of the time, current style conventions have us sporting a button up shirt with the top two buttons undone.

The problem? This style of shirt, with this type of collar, was specifically designed to be worn with a tie. When we leave the top two buttons undone, the collar and shirt placket don’t have enough structure to keep a tidy shape. The result is a shirt opening that sags and folds onto itself, looking sloppy and more “gross guy at a club with 4 buttons undone” instead of the “modern, thoughtful, competent gentleman” we’re going for.

It doesn’t matter how much starch you have your dry cleaner put into your shirts, within ten minutes of wearing your collar open, it’s going to fall. Traditional (and upgraded, more later) collar stays keep the collar points in shape, not the collar opening.

Rob Kessler, the man behind Million Dollar Collar recognized that the problem isn’t the collar; the problem is the placket, that’s the strip of fabric with the buttons and the holes, and when you’re collar is open, the placket simply can’t handle the weight. So he invented a collar support. 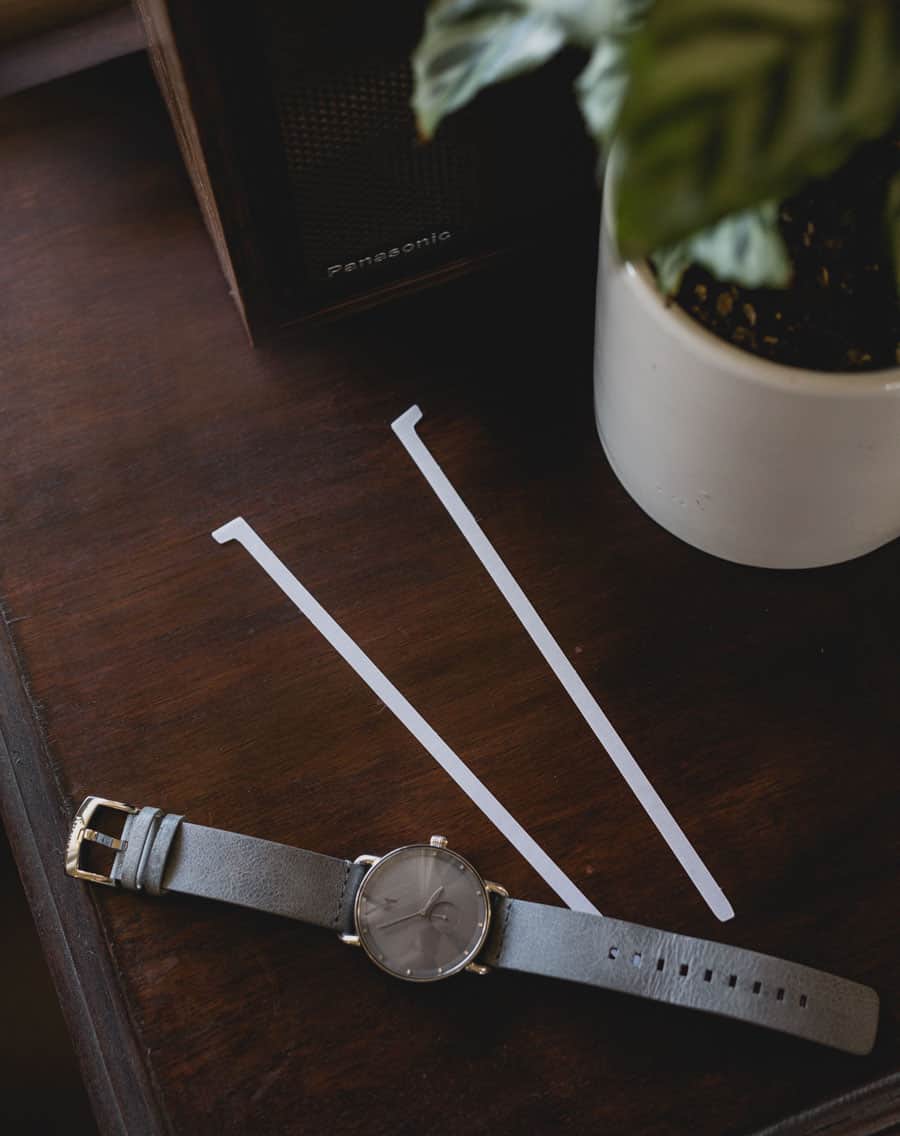 The design of the Million Dollar Collar placket stays is profound in its simplicity, but these aren’t just cheap strips of plastic. The Million Dollar Collar placket stay took nearly three years to perfect because Rob wanted to make a product that could withstand years of dry cleaning (they’re flash steaming your shirts at over 400℉). He even ruined 100 test shirts in the design process. 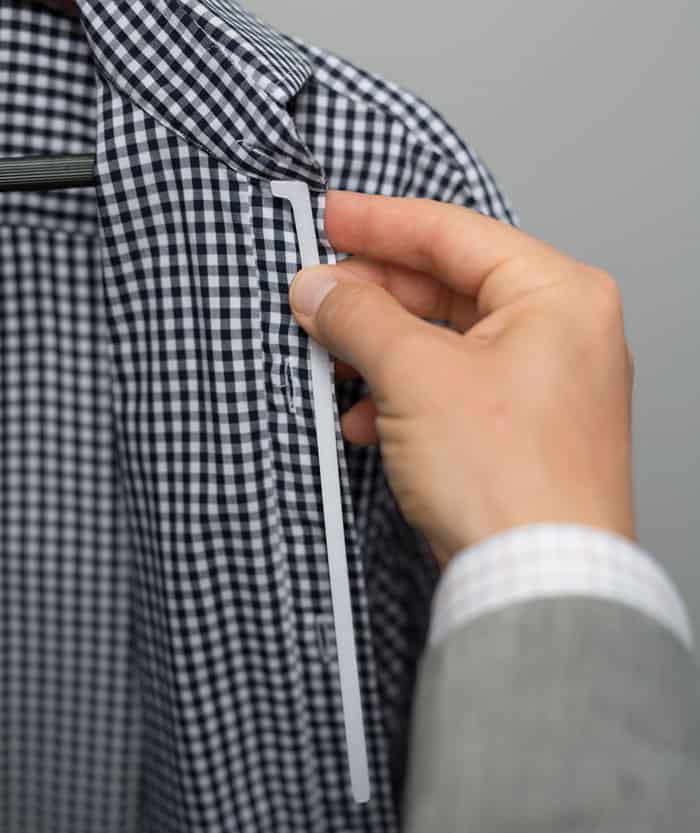 Placket stays are inserted into the placket to give it structure

You can starch the hell out of your shirt; you can put in collar stays, and you can pray, but until you support the placket, your collar simply won’t stay up. The Million Dollar Collar placket stay sews into the placket of your shirt. It’s a simple, three-step process, and Rob even has a how-to video on his website.

Or do what Primer founder Andrew did: His tailor inserted them for practically nothing. The sagging collar is no longer an unsolvable problem. Check out the Million Dollar Collar here. 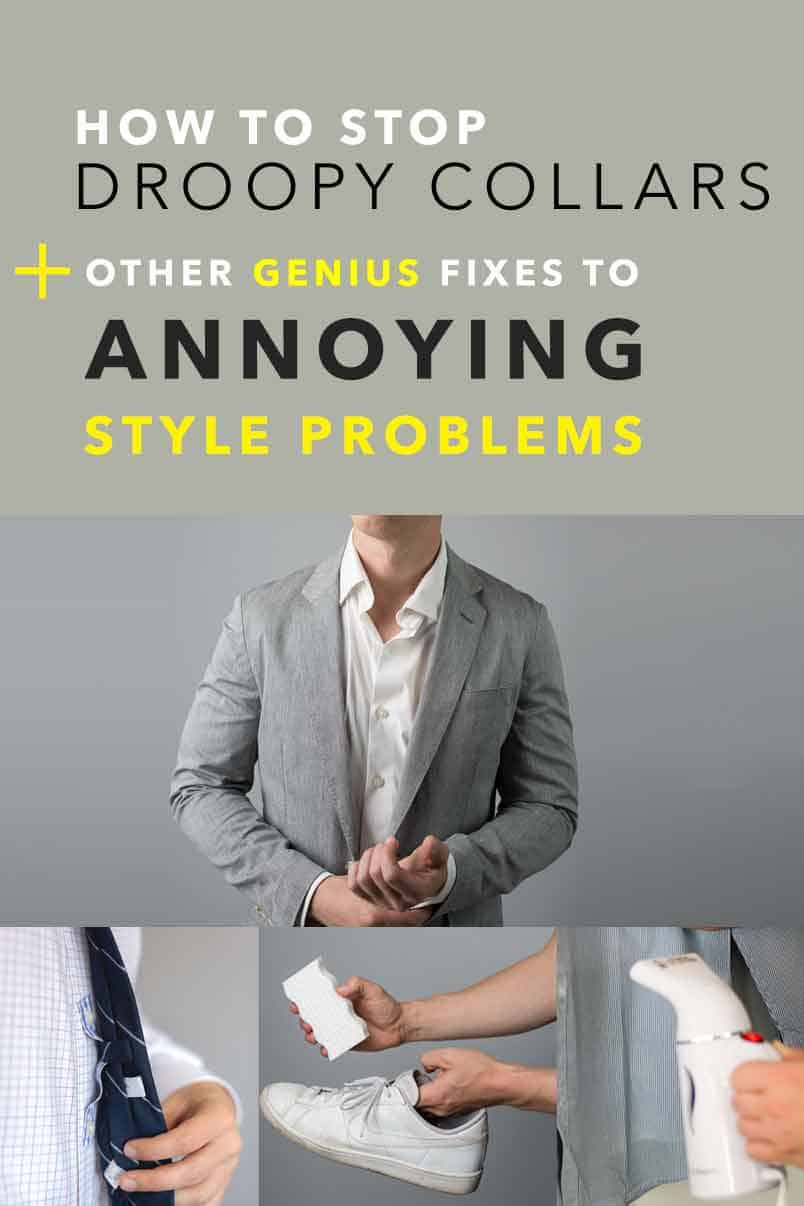 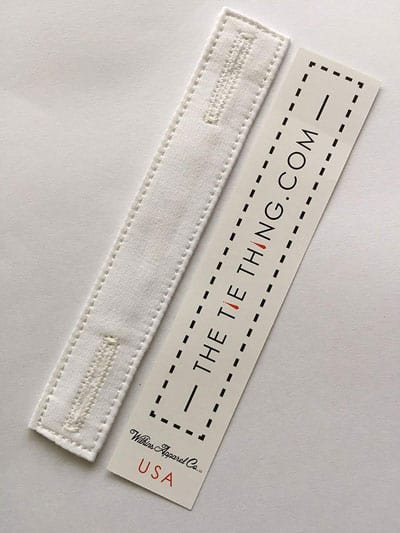 The Tie Thing is such a genius, cheap solution it’s a wonder they’re not included with ties

Your shoes are shined. Your shirt is pressed, and you’ve got on your favorite tie. You look good today, and you know it, which is crucial because today is a big day. You walk outside, and a gust of wind blows your tie right up into your face, and suddenly your cool factor has been obliterated. We’ve all been there, and no matter how handsome you are, few guys can pull off this look.

And whether it’s because you’re dealing with wind outside, or just normal movement keeps pulling your tie out of place, having a tie you’re clearly not in control of completely counteracts any sense of formality or confidence wearing a tie is supposed to instill. We end up looking like someone swatting at flies just trying to keep our tie in place.

The Tie Thing is one of those inventions that makes you contemplatively chant “Why didn’t I think of this?” It’s a small strip of 100% cotton with two buttonholes sewn in. Slip it under the label on the back of your tie, and attach the two buttonholes to the buttons on your shirt. Now your tie can’t go anywhere; wind be damned. 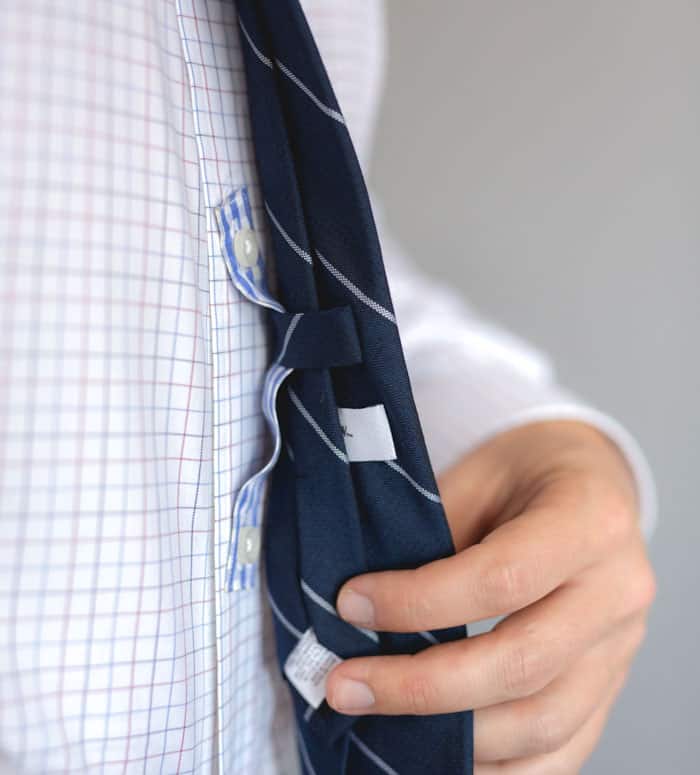 The Tie Thing is available in practically any color, and it’s backed by a 200% guarantee, which means if it rips or fails, they’ll send you two new ones free of charge (and they won’t charge you shipping). We’ll just give you a minute to let the genius of this one sink in. 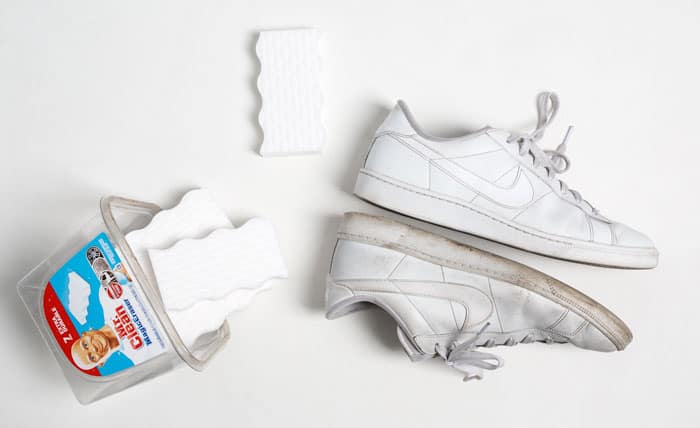 You know you’re as impressed with the Magic Eraser as we are. It takes the soap scum off of your tub and takes scuffs off of walls with barely any pressure, but it also does a great job taking scuffs off of your white-soled shoes. A fresh pair of white kicks is a power move, but hell has no fury like a man who just scraped his Stan Smiths against a curb. 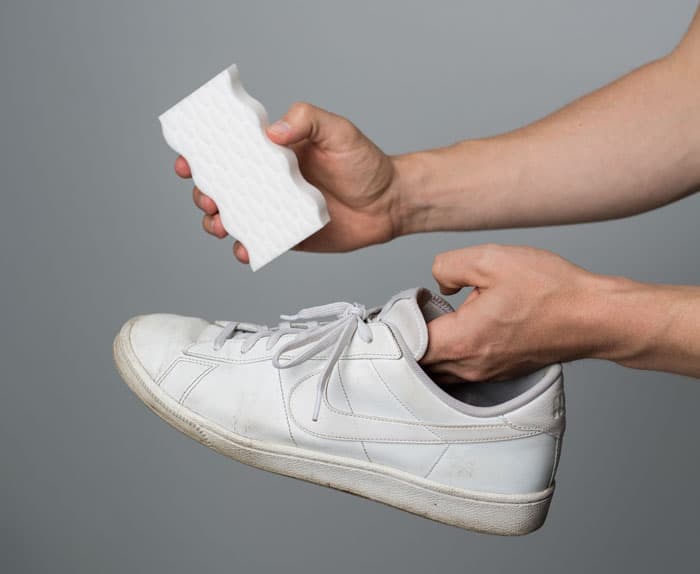 Relax, take a breath, and get out your Magic Eraser. The trick here is not to go nuts with the pressure. Let the eraser do the work, and remember, it only needs to be moist, not dripping wet. Fun fact: Magic Erasers are made of melamine foam, which is the same material used for acoustical clouds in recording studios.

Just in time for summer, breathe new life into your white summer kicks that were all but destroyed last year. 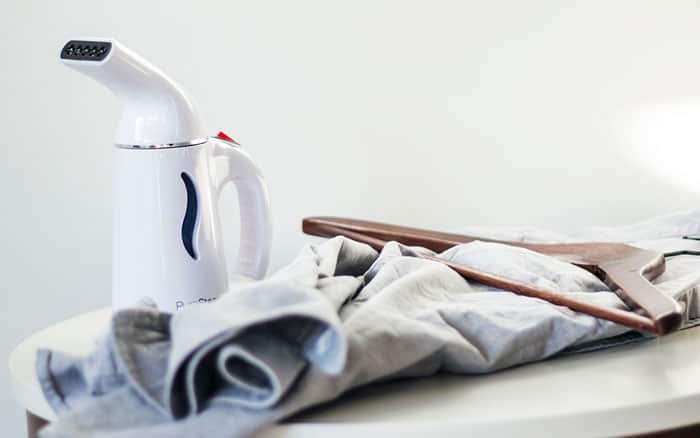 Wrinkled shirts and pants may have their place on the runway, but in the real world, you know an outfit riddled with wrinkles simply looks unkempt (unless it’s linen, in which case, rock the hell out of it). Some guys have neither the time nor the inclination to iron, and handheld steamers seem great in theory, but the problem is finding one that actually works.

Andrew can personally attest to the effectiveness of the PureSteam portable electric steamer. To use his words, “It literally ERASES wrinkles in front of your eyes.” Check out this video of Andrew taking care of the wrinkles on a shirt.

Of course the problem with finding a product that actually works and makes your life easier is that it typically commands a premium, but at $25 the PureSteam steamer is hardly out of anyone’s budget. It’s also worth noting that this steamer has a pretty small footprint on your dresser, so you won’t need your dad to help you build a wooden stand and private closet for it like some of the “at-home” steamers out there. 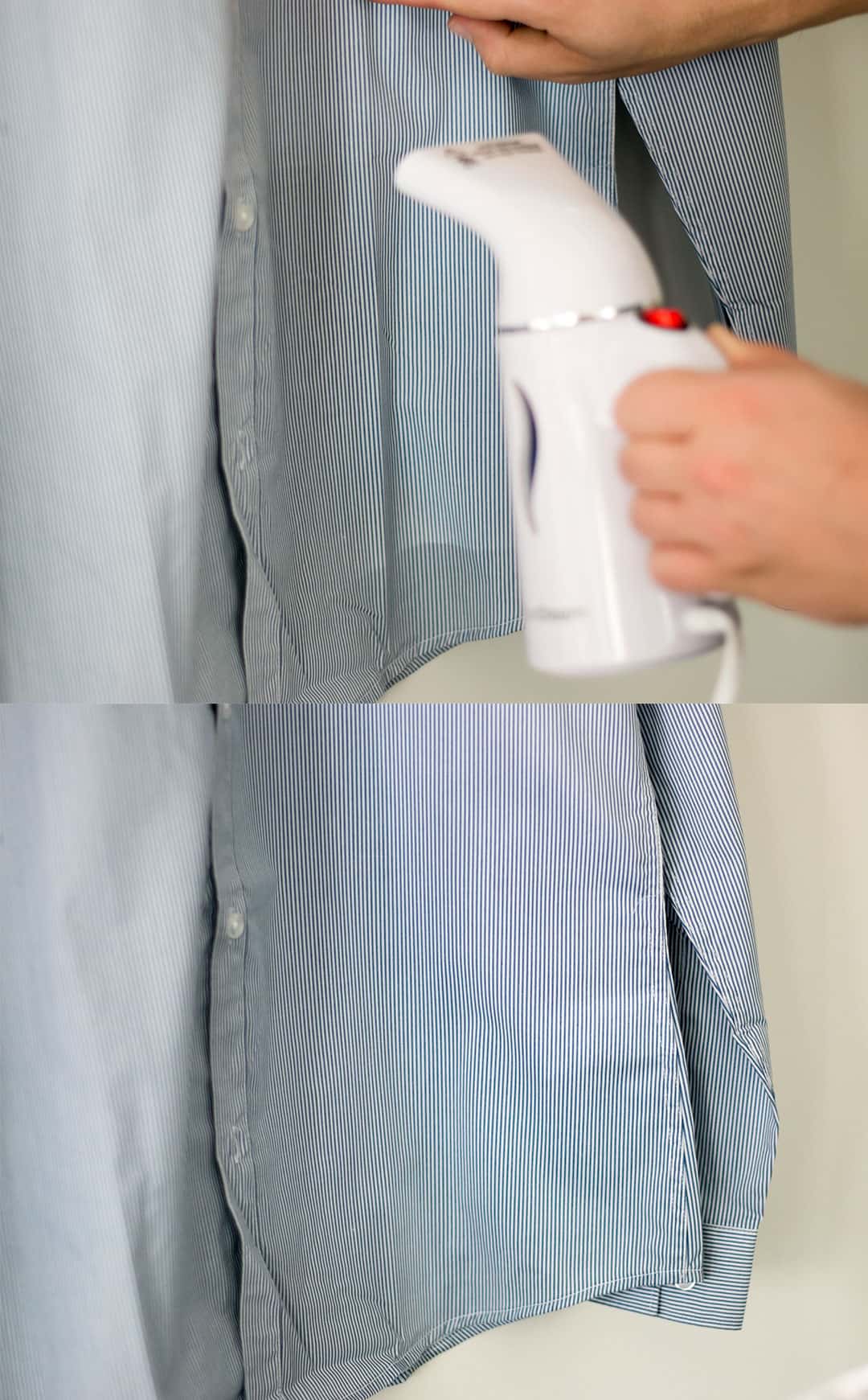 If you’re insistent on the the starched, dry-cleaned look, then stick with your dry cleaner, but for regular touch ups and most instances, the PureSteam is more than adequate. Give it a full 90 seconds to warm up, and then let the steam do the work. 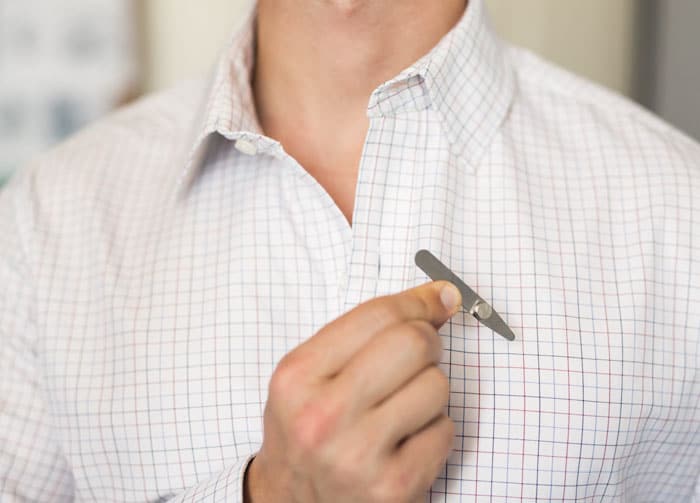 If not you’re not keen on the button-down collar, then you’ve experienced the all-too familiar woes of trying to keep open collar points in place. You thought collar stays would do the trick, but they’re only half of the battle. You got the Million Dollar Collar, but the collar points still have nowhere to go. Jonathan Boos, inventor of Wurkin Stiffs Magnetic Collar Stays, decided that like a ship trying to sail away, collar points need an anchor. He built Wurkin Stiffs from the ground up, starting with an actual paper clip and a refrigerator magnet.

He got the patent; he got the prototype, and then he invested his own savings into a product he believed in. How does it work? Simple: the collar stays are metal, and they come with a small (yet insanely powerful) magnet. Put the collar stays in your collar; put the magnet under your shirt where you want your collar points to lie. Done.

Pair these with the Million Dollar Collar and you have a shirt that will never let you down. One pair is $20 on Amazon and will last the rest of your life (they’re made from surgical alloy), and let’s be honest: you only need one pair.

Special thanks to Million Dollar Collar for inventing a solution to a frustrating everyday style problem, and for supporting Primer by partnering with us on this post. Primer readers can use the exclusive code PM10 to get a 5 pack of Million Dollar Collars for only $11!

What I Learned – False Information About…

What I Learned – Bad Bunny’s Crocs Sold Out…